I've always had a soft spot for the old Fantasy Warriors Dwarfs sculpted by Nick Lund, and in the late 80's I collected oh about a couple of dozen. The great Stuff of Legends site shows the original range hereand here. Then in the last couple of years someone invented Ebay and didn't put a warning label on it... The consequences are that I now have almost 450 of them. 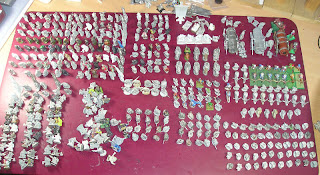 I dug them out today and organised them into units. Yes, I know there are too many of them to play a sensible game, but i do love the massed units look.

These figures are back in manufacture by Mirliton of Italy and Em-4 Miniatures here in the UK.

This is the order of battle I came up with, based entirely on what i have, rather than any kind of sensible structure. It works out at 6,580 points without including tandards, msicians, leaders, hero's etc...!

I think i may have over done it...

The numbers in brackets is the order i've just put in with Mirliton to fill out the remaining slots!

If you're interested in Fantasy Warriors game then I suggest you join the FW Yahoo Group.

So just 450 figures to clean, base, undercoat and paint...

... but then i haven't sorted through the Grenadier orcs and goblins i collected to fight against them....
By Brandlin