To finish off the Furbarnii tower complex I have built I decided to add some imagery with a couple of home made decals. I thought If these turned out ok then I would add them to the kit.

The first is my take on the Furbarnii empire symbol that Mike Thorp the creator of Twilight suggested over on the Forum of Doom. This prints at 25mm by 30mm so its pretty small compared to what you see here. Its going to be used on a hanging pub-like sign on the side of the tower. You can see the bracket for it just above the lean-to on the right hand picture on the previous blog post. 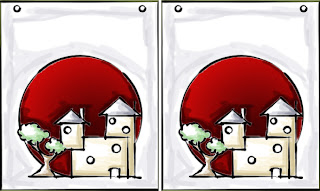 The second is again taken from images within the game, this time a copy of the shield from the Fubarnii Knight - particularly this paint job by Ben Brownlie, again from the FoD. This Prints out at around 60mm by 40mm and forms the flag which adds the final finishing touch to the flag pole on top of the main tower. 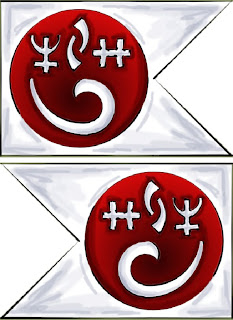 This second Decal is the largest single one I have ever made so am not looking forwards to trying to slide it on to some thin metal sheet and then bend it into a fluttering flag shap - wish me luck!!