I've built the first of the fully laser-cut kits for the Pryn-Gul Tower.

There are a few small changes required to the geometry before I cut the final kits- but that's why you do a test. Overall I am very happy with this, especially the shingled/slated roof and the cut out for the turret section! The Balcony with railing surround also worked well, and is pretty robust!

Here are some overall pictures. I'll take better ones in the next few days along with some close ups. Click the pics for bigger pictures. 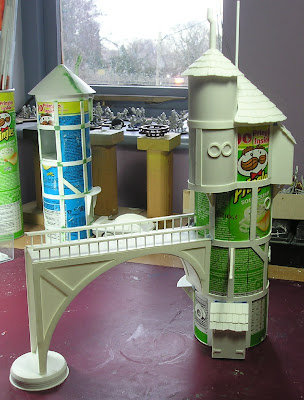 The blue Pringles tube in the background that you have seen on previous posts was made from hand cut styrene and was a lot harder to put together than the green on which is fully laser cut. 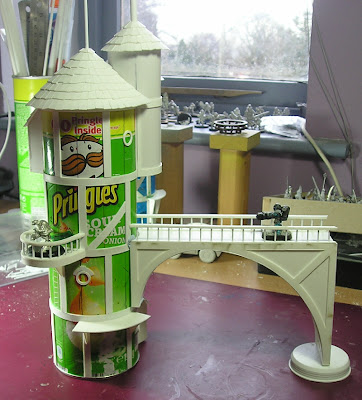 Each of the elements of this build is modular and can be placed in any position on the tower. Door canopy, balcony, lean-to shed, brackets, windows, turret, bump-out can all be assembled anywhere on the model or omitted.

The tower is also designed to mate accurately to the Tew-Fah bridge, although I don't recommend blu-tac as a permanent fixing. 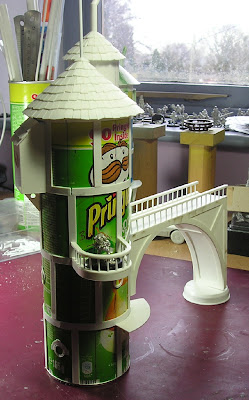 An empire engineer readies his Derak to blast some unsuspecting Devanu from the Tower's balcony. 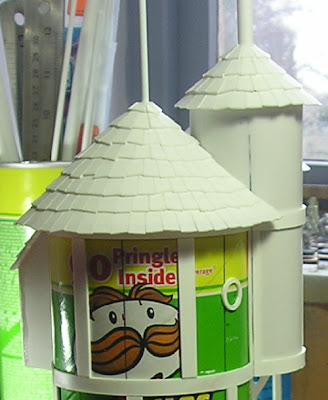 Close up of the shingled/slated roof (made from strips of 0.5mm thick precut styrene and glued in place in less than 30 minutes. So much more robust than cardboard and takes paint just as well as plastic figures!

This is what you get in the kit... 2 full sheets of A4 styrene laid out with lots of components... how many components? No Idea! I havnen't counted them yet, but there are lots...!

Big Thanks to Ian (Geronimo) from Fenris Games for his ongoing support in this and for Mike Thorp of Twilight Games for the inspiration and patient replies to my long email!
By Brandlin