I got my first ever laser cut model in the post this morning hot from the cutter at Fenris Games. I couldn't recommend Ian (Geronimo) at Fenris highly enough!

This kit is the Mobile Landing Pad that I've shown here before.

I designed this to split into A4 sized sheets so that postage is simple and cheap. 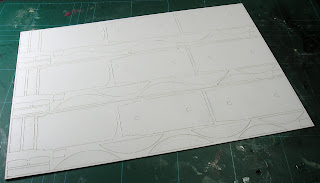 I have rubbed one with boot polish so that in this picture you can see both the cut outlines and the engraved detail. 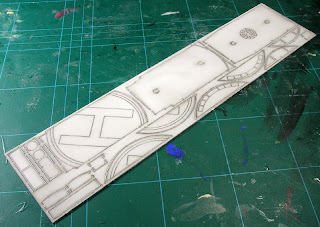 Well I was like a little boy in a sweet shop and I couldn't resist doing a test assembly!

The quality of the engraved detail is superb, crisp, accurate and fine!  The full cuts do leave a little burr on the edges requiring a light sanding when they are removed from the sprue, but this wasn't a significant problem.

The model took me about 30 minutes to fully assemble, and that was with the assistance of my 9 year old son.

I discovered a couple of minor issues with the geometry - the holes for the magnets to affix it to the chassis are a little large - thats mostly because the laser burns away around 0.2 mm of material and I had already drawn the holes 0.2 oversize, so I shall reduce this so that the magnets are a better fit. Also you may notice the front of the cab isn't as good a fit as it should be so I'll fix that too.. Other than that I am really happy with this.

As you can see from the first picture the home made hinges hold the flaps nicely horizontal, so no legs or struts will be required! I'm doubly pleased with this because as a couple of people pointed out that the legs looked like an afterthought (because they were!). 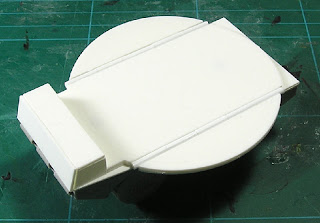 Helipad in its operational or Deployed state.

The hinges work nice and smoothly and stand neatly folded up. Whilst these hinges aren't going to be strong enough take too much abuse I reckon they are easily capable of taking handling in game allowing the model to be used both in its transit position and in its deployed position. 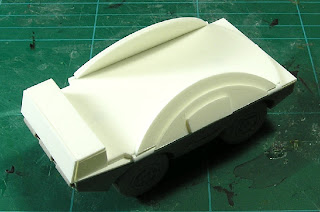 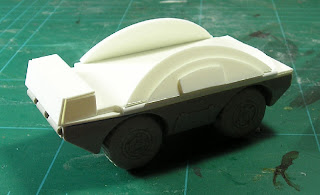 Helipad in its transit or stowed state.

So, all in all I am pleased with my first foray into making my own laser cut kit!

I'll get some paint on this in the next week or so (I need the temperature to increase somewhat so that I can get my airbrush running successfully) and I'll post pictures when I do.

As these are repeatable to cut I shall be selling kits if anyone wants one. Yes, you do need an Old Crow scout chassis to sit under it but I'm expecting my kit to be around the £2.50 mark and modular so there will be other variants of hulls to go on the chassis.

I'm not looking to make a fortune from this, mostly its case of making stuff I like and then if anyone else likes it too then covering my costs so I can make more.

The Mobile Helipad should be suitable for any small one man flier in 25mm scale - the landing pad area is 80mm in diameter.

Now all I need is for Hassle Free Miniatures to release one of its looooooong awaited Grymn fliers (either the attack flier I used a preview of for my DoD entry or the frankly stunning Grav Bike). or for Fenris to release its small flier.