It's been a long time since I added anything to this blog; Partly because I've not done much modelling, painting or gaming this year. I was made redundant in October 08 and am still unemployed so my efforts are elsewhere.

However in a bid to save my sanity I am going to try and post more often and dedicate some time to my hobbies.

I wont promise more posts, or that i'll actually find my paintbrushes, but the intention is there. To motivate me I have decided to enter the Diorama of Doom IV (DoD IV) modelling and painting competition run on the Forum of Doom (FoD) by the combined companies of Heresy, Hasslefree, Black Scorpion and Eolith Miniatures (nee Spyglass).

It'll come as no surprise to readers of the FoD that my entry has a somewhat Grymn bent. Competition rules preclude me from posting finished pictures, but require me to post pictures of the starting figures and encourage posting of pictures showing conversion and modelling undertaken.

My starting figures are -For extra brownie points the rules state that resin scenery can be used but they'd prefer it to be from one of their friends/partner companies Antenociti's Workshop, or Fenris Games. So i'll point out that the attack craft was originally designed and cast by Jed @ Antenociti's and the base featured in the picture below is an 80mm lipped base from Fenris. 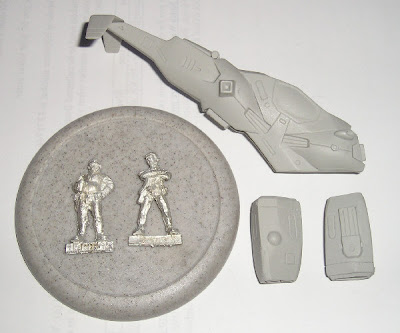 I also need one of the Grymn pilot figures that Kev White from Hasslefree has as a WIP... so i am crossing my fingers that it'll be on general release in time for me to include it in my diorama. 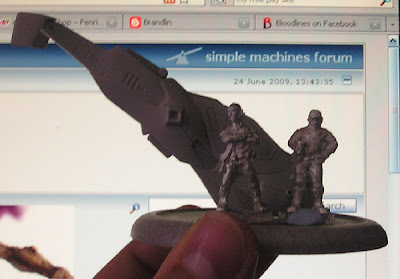