Having ruined the painting of the copter for my diorama I've taken a break from that and I've been playing about with the soap effect I need to complete my Diorama of Doom entry. I've tried half a dozen different methods, some very unsuccessful. Photographs of the best two are below. Click on the pictures for a bigger image which better shows the detail.

These samples are VERY difficult to photograph well as the light bounces off both the white of the ink and the shiny bubbles as well as the glossy sheen of the PVA seal over the top leading to overexposure. I'll get better photographs on the finished diorama when I get diffused light through my light tent. 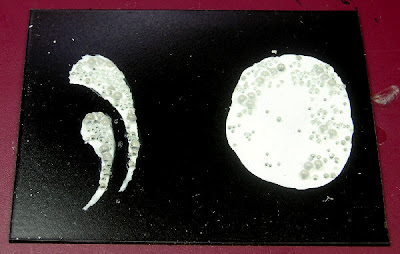 The right hand side of the sample shows a test 'pool' of soapy water, and the 'strokes' on the left show how this soap might be washed onto a surface. 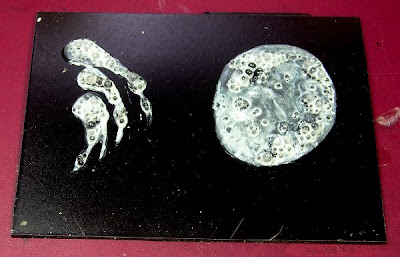 I prefer the second as it has a murky quality with more depth than the first. The sample is not as bright white as it appears in the picture. Its a little cartoony, as the bubbles to scale would be up to 4" diameter, but I think it's clear what is being represented and its not grotesquely caricatured.

It's made by coating the area to be soapy with PVA glue, then strategically placing tiny glass micro beads (used like glitter in card making) one at a time with tweezers. The location of the beads is not something to do randomly - I start with the 2mm beads placing just a few in small groups, then build up round them with the 1mm beads and then finally a scattering of the 0.5mm beads leaving plenty of clear bubble-free space in the centre of the big pools of soapy water.

Then once dry I mix white Daler Rowney Ink with water in 10:1 ratio. I'm not sure what base the ink has, but it doesn't fully mix with the water leaving the slightly oily separation effect you see. This is then flooded on and allowed to settle around the beads. Once dry a final coat of PVA is applied to seal the whole thing.

I think this has worked pretty well, and am looking forwards to applying the effect... wish me luck!
By Brandlin