So today I finished the mounts for each of the turrets and weapon systems. I'm using Old Crow 15mm and 6mm turrets for this, and I brought all of the elements of the Drop ship together for a couple of pictures.

I only have engines and mounts and tail fin for one side of the ship (as I have yet to cast the others), hence the slightly artistic angles to try and get a representation of what this will be like when finished. On top of the ship you can see a rear missile turret for air to air defence during the descent. On the froward port mount is a radar array. 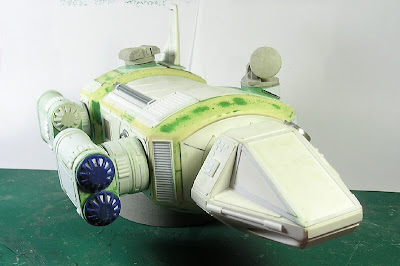 Here you can see the under mounted forward turret - a 6mm Old Crow Turret - used for anti personnel defence duties while the ship is grounded. Also visible is the forward port 'tube' in which i was originally going to mount forward pointing machine guns for ground clearance - I think now these will house forward firing Air to Ground Missiles instead. 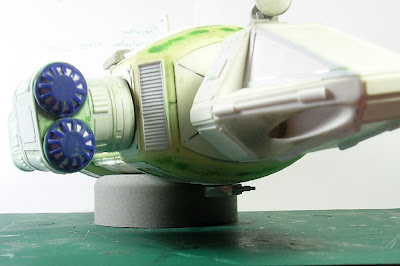 Finally a close up of the forward and aft undermounted turrets. You can also see the rectangular areas that need to house the undercarriage/struts which I have still to complete, and at the moment are giving me a headache as I can't get a design that i both like, and i can cast to recreate... 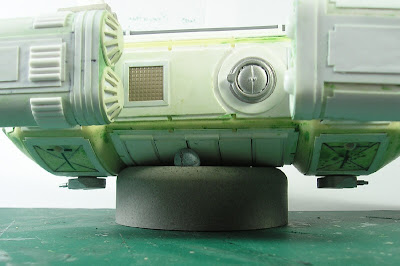 The big thing I've noticed now that I have all this assembled is the very large windscreen. It's in keeping with the windshield on the old crow gecko and goanna vehicles which was its inspiration, but now I look at it and can't help but thinking "That's one hell of a lot of glass!" Especially given that this craft needs to dive through the atmosphere. Its also a large expanse without any detailing on it and I'm not sure it fits with the rest of the vehicle...

Ho Hum... wonder what I can do about that then?

As always, comments and criticism are welcomed
By Brandlin