I've talked on here before about my love of Nick Lund sculpts, and my view that his best work was done for Grenadier back in the late 1980's and early 1990's.

I've always liked dwarfs so when i saw these in Tottenham Court Road Virgin Games Store i had to get some. They were grim, dour, and looked the business. No orange haired silliness in sight, just a massed line of chain mail and axes. Proper Dwarfs.

Over the years I've dropped into ebay and bought a few more.

I started basing these figures around 4 years ago, on laser-cut ply supplied by the rather wonderful Fenris Games. But I still have some way to go. The Ply is then on magnetic tape which holds the figures in Games Workshop movement trays lined with steel sheet.

Today I got organised and took some pictures. Its amazing how the numbers build up slowly over 20 years. I think only a handful of these were bought full price. All the rest are e-bay buys. 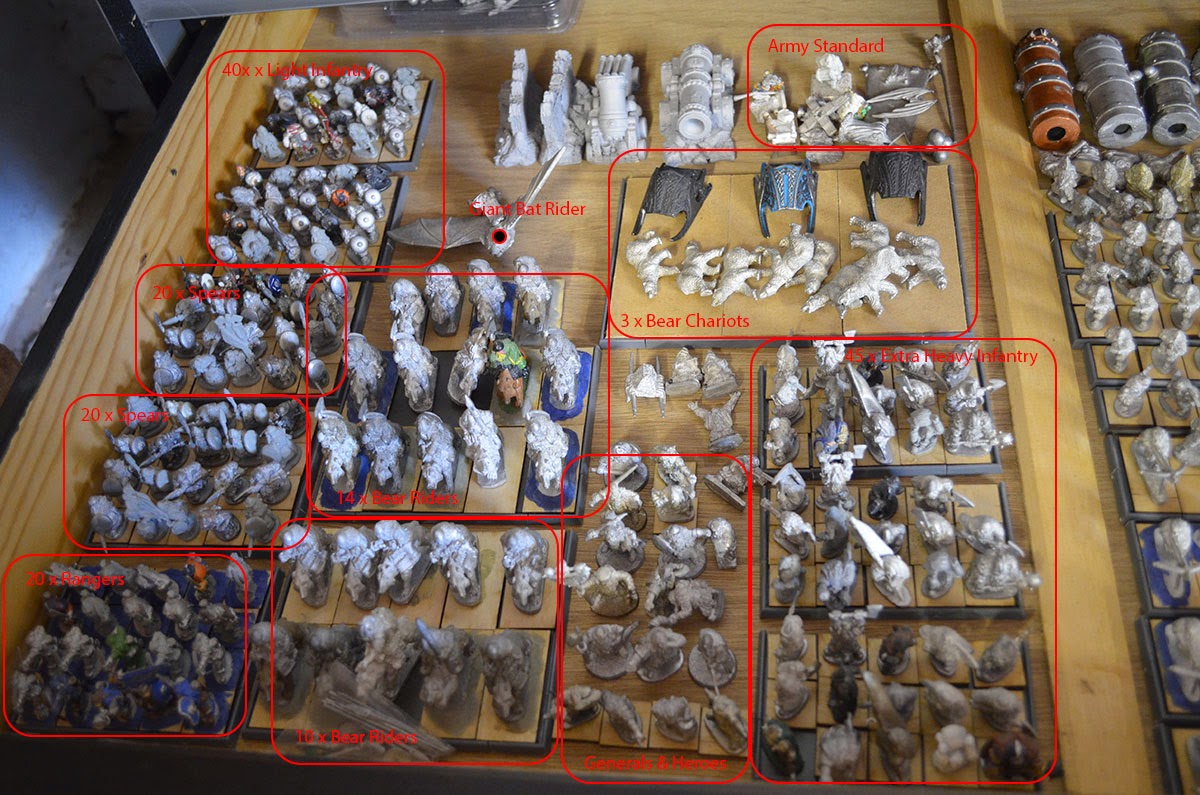 Note that the Bear Chariots are NOT grenadier or Nick Lund - I think they may be old Ral Partha Snow Barbarian chariots or some such. I just like the, but they have made me want to put snow on all the bases and paint the bears as Polar Bears!

You can't buy one army without having something to fight it. As a Nick Lund fan it was only natural that I'd get orcs. Nick's orcs were just like his dwarfs, brutal, functional and grim. The black orcs that nick sculpted for citadel back in the day became the basic pattern since. Before they got all "Waaarggghhh!" and spoke in comedic brummy accents.

So I started picking up a few of them. This is what I ended up with. All but a handful are e-bay buys, with a few extra musicians and heroes from the ever helpful Doug at em-4 miniatures, and a couple of Mirliton purchases. 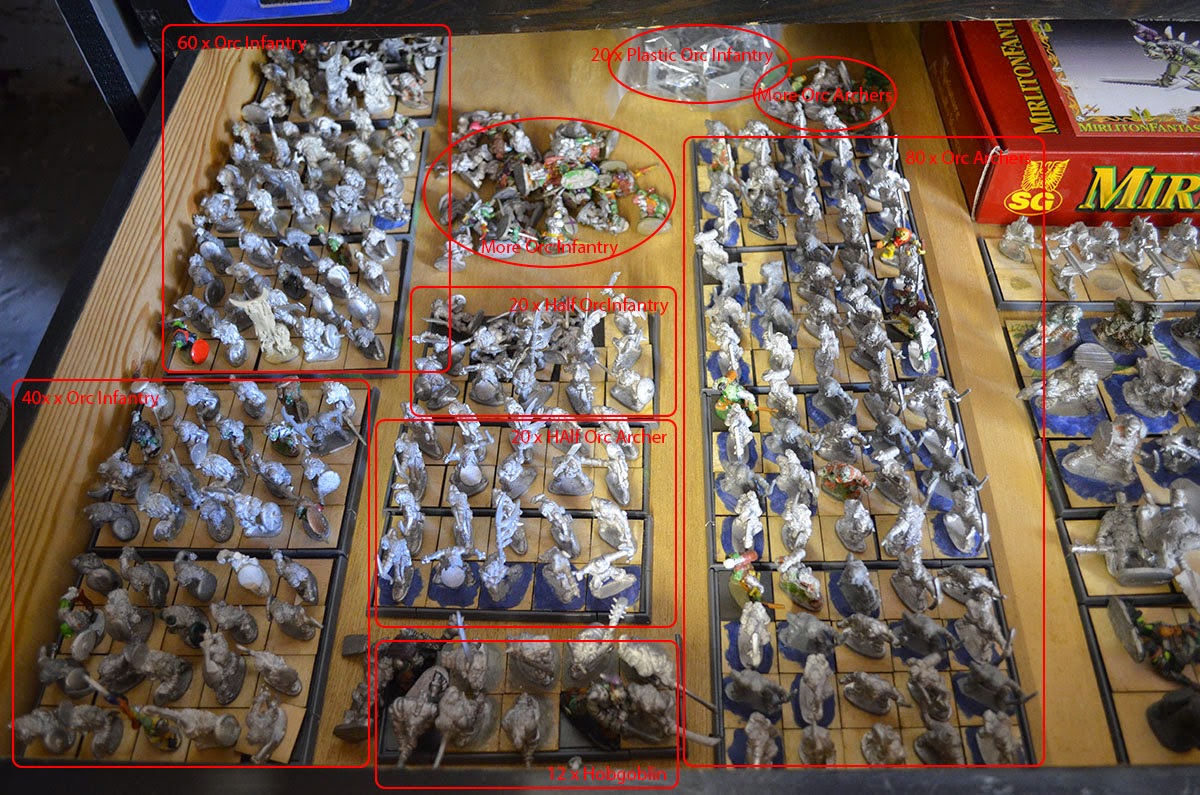 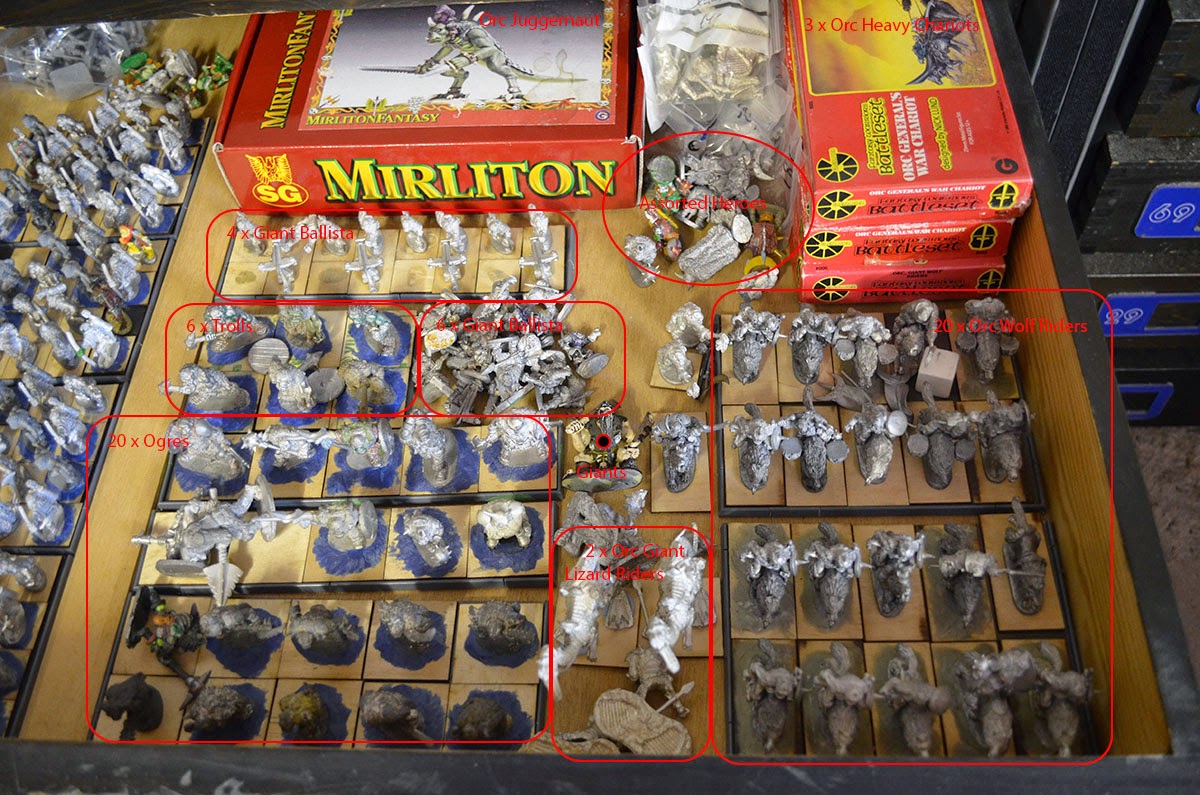 One of the best things about Orcs are the Wolf Riders. I didn't seem to have many of them. So... 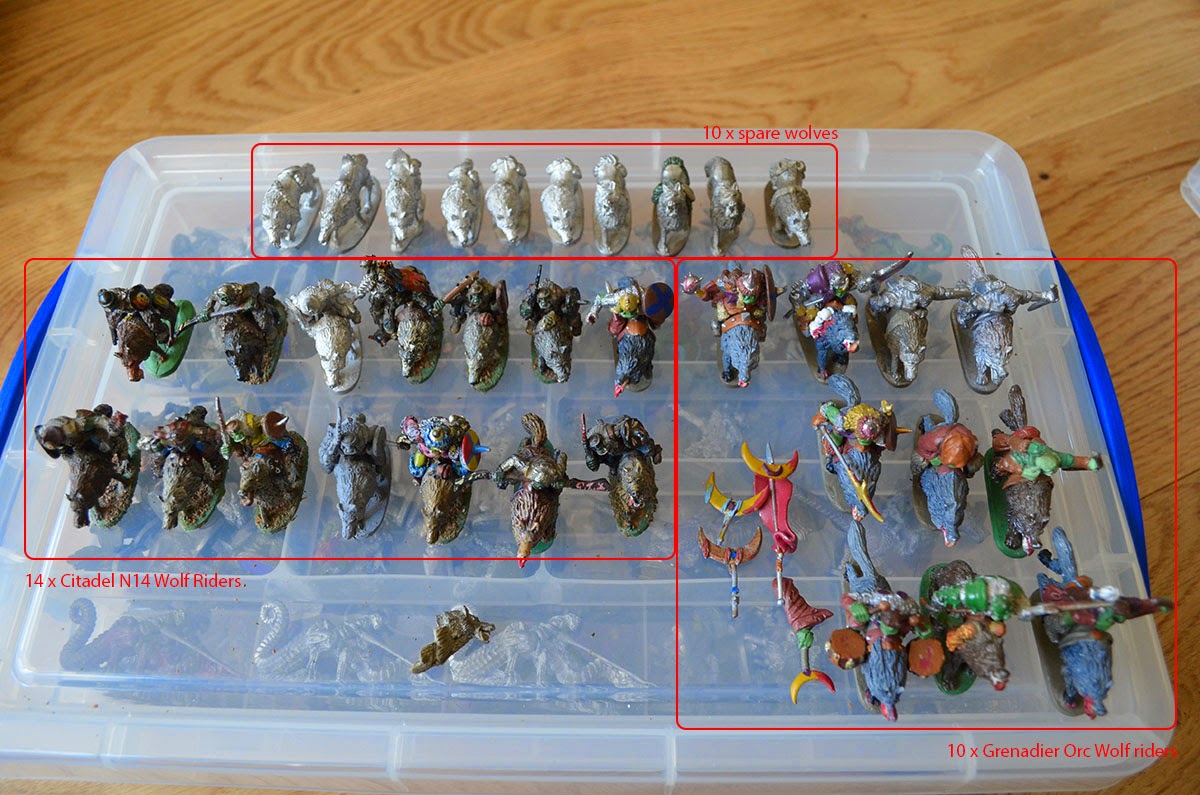 I have included here a number of Citadel N14 Orc Wolf Riders as they were again sculpted by Nick and although they are a tiny bit smaller the style is the same and there is greater variety to make a unit look more of a rabble.

I make that about 250 Infantry, 44 wolf riders and 26 assorted Big things, 3 Heavy Chariots and a Juggernaut (which I hate the sculpt for- but have included for completeness... thank you OCD!)

Now, one of the great things about Orc armies is the amount of allies they have and the variety in the troops. If you are going to have orcs then you really do have to have Goblins!

The goblins haven't had anything like as much love as the Dwarfs and Orcs, and aren't even glued to bases. 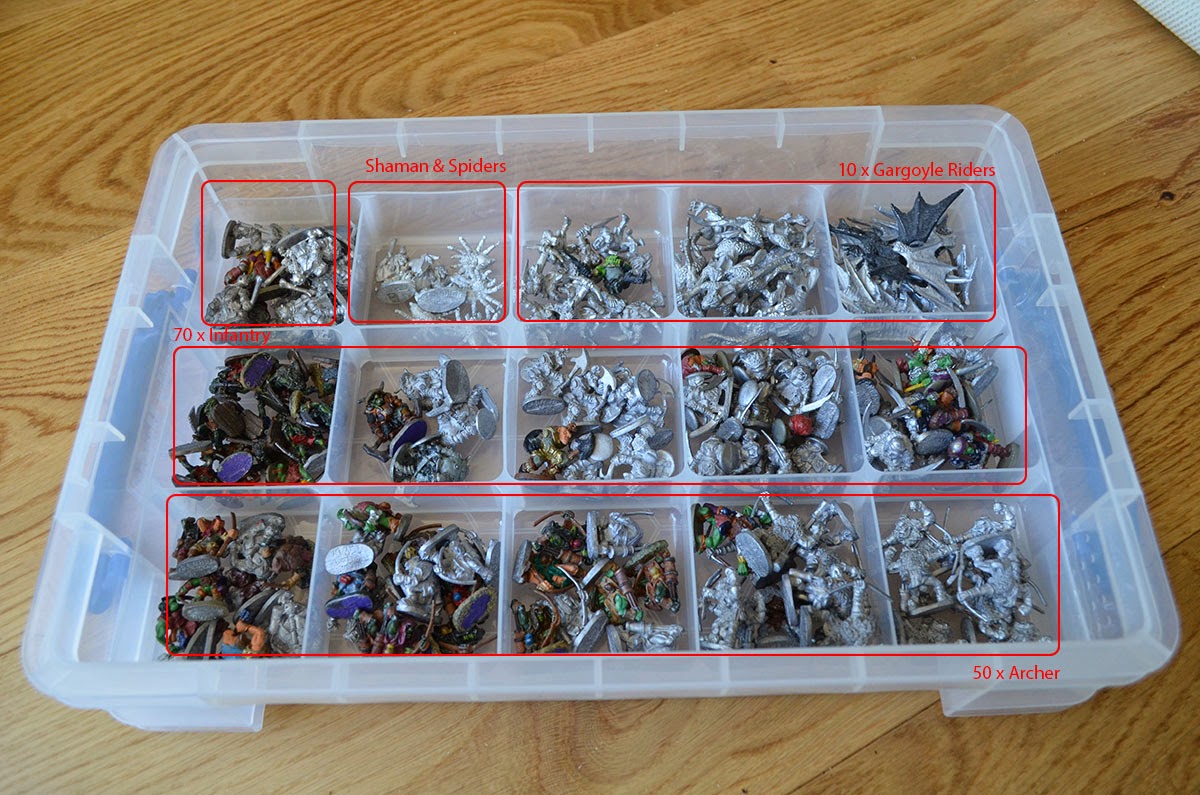 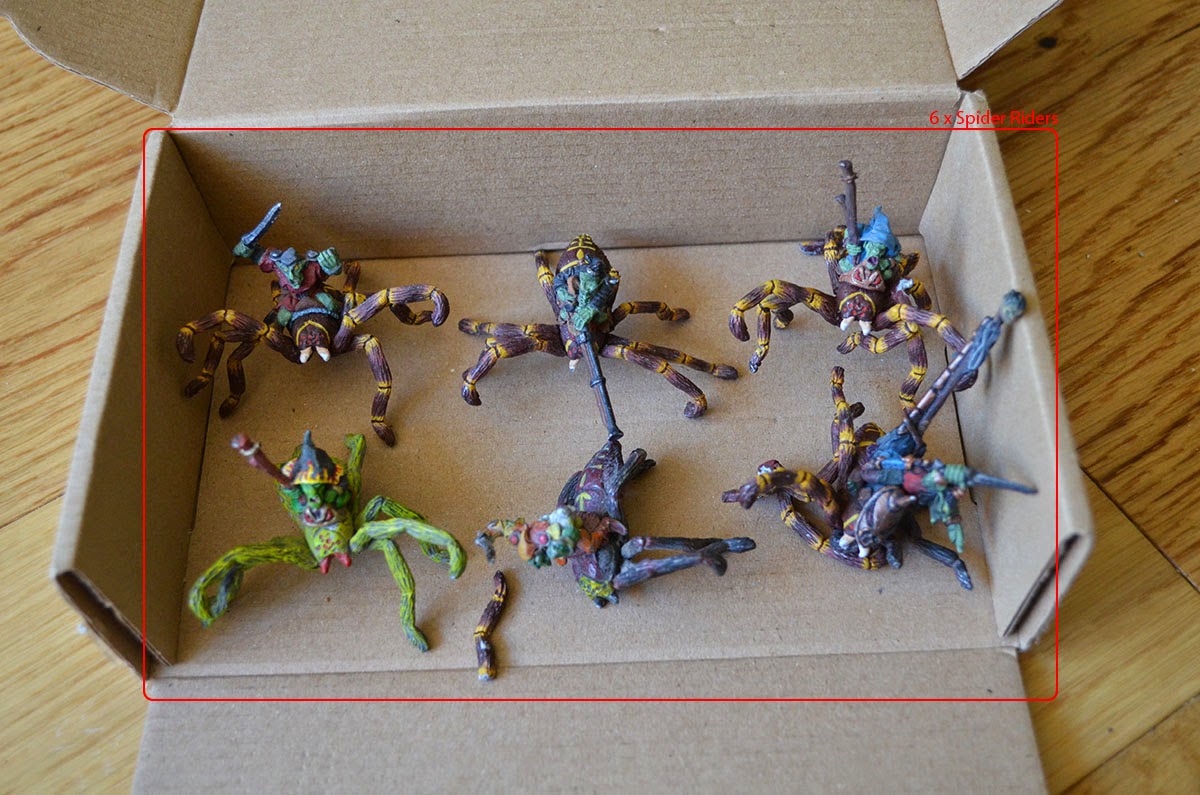 The orcs have those three lovely Big 4 wolf Chariots. And we all know that what orcs have goblins want, only smaller and faster. So ... 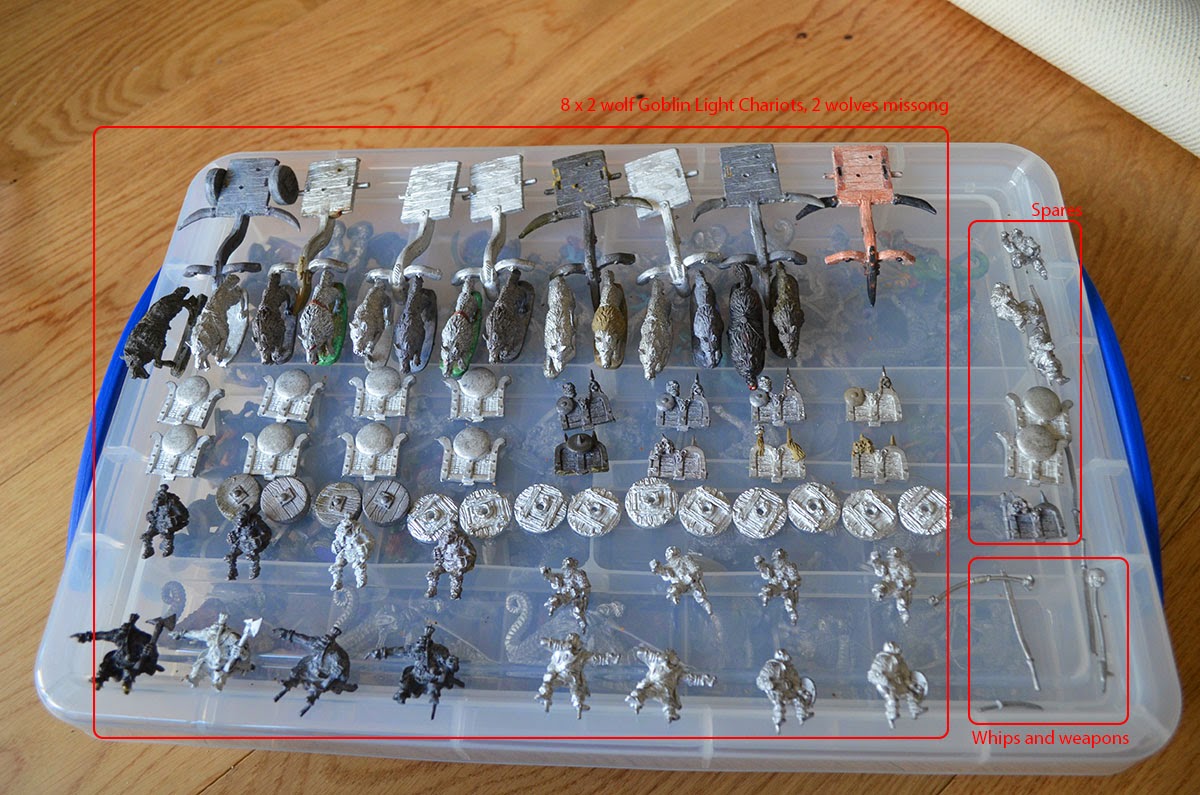 That's enough parts to make 8 Chronicle 2-wolf light chariots, except I am two wolves short and had to include 10 wheels from elsewhere. There were 3 versions of this chariot as you can see from the variations in the number of sides and the crew. Also, the sythes, and rams head fronts of the chariots vary. I'm not sure which went with which versions as the only references I can see on the web do not have photographs, so I'm going to mix them up a bit.

And I forgot to photograph it, but I have one of these too. Again bought from Mirliton. 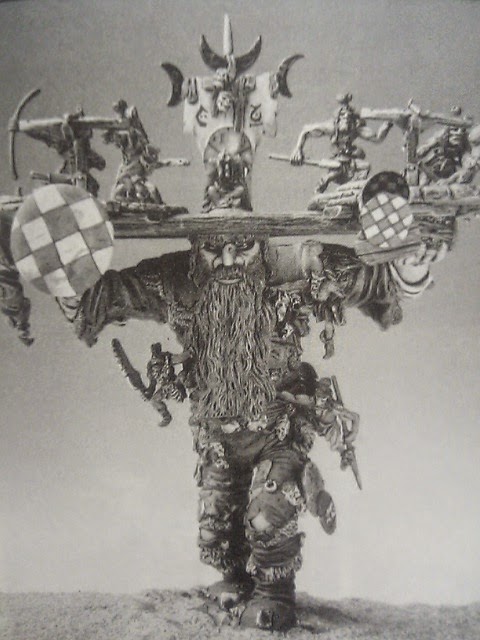 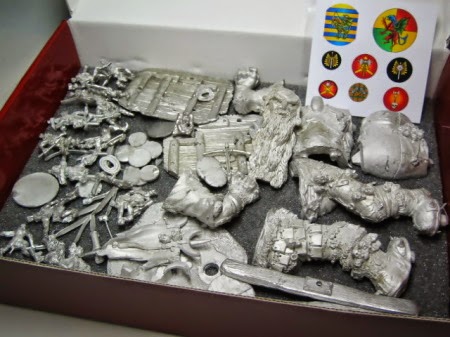 Well there you go. One long days organising and categorising.


I should point out that I have managed to paint a grand total of 20 dwarfs out of this whole list. Everything else with paint on it is as it came from e-bay.