Now thats what I call a lizard rider!

I picked up a couple of these on ebay recently. 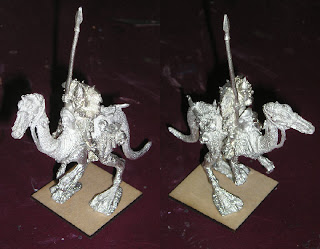 No Idea why really, as I had told myself I was limiting my Orc army to just Grenadier Fantasy Warrior figures (well, plus a few Chronicle ones thrown in, but then they're by the same sculptor - Nick Lund - so no one would spot them would they???).

Actually I do know why... because they LOOK LIKE BIG BIRD!!!.

It's a properly awkward, gangly, long-legged riding lizard. It just looks as though it's meant to be striding about the waste lands and galloping away from predators (or the cookie monster)! Far better than the "not-hot" lizards produced by other companies I thought.

Clearly these aren't the shock troops of an army but highly mobile advanced scouting parties and mounted skirmish troopers. Who wouldn't want a unit of these on their Orc Flank?

Anyway a bit of scouting about on the web lead me to the Ral Partha Europe website (which is always a little treasure trove of miniatures you think are gone forever) and hey presto (or abaracadabara, or izzy wizzy lets get busy - or whatever your magical innvocation of choice is...) they are still available! They come as archer (3 variants) , spears (shown), commander and standard bearer, all unfortunately on the same pose of mount known as a Death Jaw.

Now I had bought them to complement the Grenadier Lizard riders I had picked up, but as you can see they're clearly a different species and unless you have a very broad multi-cultural diversity policy in your units they simply wont mix. 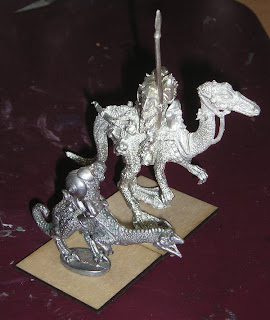 Both of these figures are shown on 40mm square bases. At £5.75 the Ral Partha lizards are pretty good value; they stand almost 80mm to the top of the head! The bodies come in three sections; left leg and lower body + right leg and lower body + head, neck upper body and tail. It goes together OK, but needs a thick superglue to fill the joint and some poxy filler.

I'm not too enamoured of the style of the riders, and they are quite large, but I can easily swap these for say Orc wolf riders from the Grenadier or Chronicle range.
By Brandlin