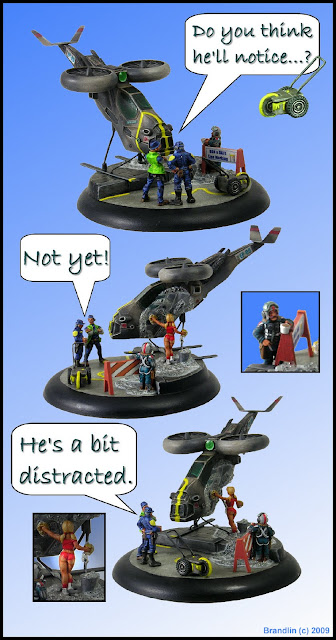 Our scene here shows Bob and Dave from Bob and Dave line Marking Limited, discussing the latest cock-up of the younger partner Dave and wondering just how long it might be before the 'copter pilot notices the newly applied yellow line over the nose of his prized flying machine.

Luck it seems, is on Bob and Dave's side for a while as Squadron Leader Gaffer seems to be somewhat distracted at the moment. Having paid his £10 he is idling away a relaxing few minutes with his cup of char while watching an employee of the Megan Fox hand car wash emporium going about her business!

After several tens of hours of work, trial and tribulation, many packages arriving in the Royal Mail (when it was still moving) placing several hundred glass beads with tweezers, cleaning, recleaning and cleaning my airbrush again and again, cutting and applying tiny decals, painting and repainting, falling down stairs and rebuilding the copter, then lighting and relighting the diorama, and finally taking pics and putting them together in piantshop - I AM FINISHED.

This has been a labour of love and hate. There have been times when this diorama was close to going out of the window and times when I've looked it and thought "wow thats better than I could have expected. Its also the first time I've done a diorama, and the first painting competition I have entered!

The large 100mm Base is from Fenris games as is the barricade which is laser cut acrylic painted and then with home made decals applied.

The raised pavement is green-stuff and plasticard, with the copter undercarriage fashioned from pasticard and paper clips, the line painting machne is made from wheels from a 1/72 WW2 german Kettenkrad kit from Hasengawa with the body made from plasticard and the handle from a bent paperclip.


Bob and Dave are Scifi Customs Inspectors from Heresy Miniatures.  Squadron Leader Gaffer is the Grymn Pilot from Hasslefree Miniatures, and his vehicle is the soon to be released Grymn attack craft from the same company. My version is turned into a copter with the addition of lift fans from Evil Mushroom Games.


The car wash girl is a simple conversion of Summer the Cheerleader again from Hasslefree Miniatures. Her pom poms cut down and smoothed to resemble big sponges and her left arm cut off and repositioned with pins and greenstuff above her head.


The bucket comes from a Tamiya 1/48 WW2 diorama pack and the decals were home-made using paper from Antenociti's Workshop. Paints from Foundry and varnish from Testors. Finally tiny tiny glass beads from Blockhead Stamps in America - yes i had to import them as this was the only place I could find multiple sizes under 2mm diameter.


Right I think thats all of the name checks for companies. I should especially mention Kev and Sally White from Hasslefree Games who provided the Attack flyer and Grymn Pilot to me ahead of their formal release as i am such a nice guy (and good at begging) so i could get this diorama finished in time. Thanks guys - you're the best!


The soap was by far the hardest element of this diorama as I had to figure out how to do it from scratch. A lot of people on the FoD, and on CMoN and TMP have offered some elements of advice, THANK YOU all for putting up with what might have seemed silly questions at the time. Subsequently a few people asked for the steps on how I did the soap, so here is the method I developed.

After a lot of tests it became quite simple:
Simple!

The area of the copter which is covered in Soap is deliberately lighter than the rest of the grubby vehicle to try and show that its getting cleaner. The copter was airbushed with Foundry grey/blue shades and then washed in black and brown ink to grubby it up a bit. The ink wash was simply not applied over the area to be soapy.