I was in conversation with a few fellow 2000AD ABC Warriors fans a few months ago. The discussion revolved around the ABC warriors already created by Wargames Foundry.

I have all the Foundry figures thanks to a half price sale last year, but haven't got round to painting them yet (surprisingly!). Two of the major hurdles were that Foundry Never produced figures for Happy Shrapnel or Mongrol.

I was just browsing TableTop Gaming News and saw an article for Rattrap Productions who are now making this: 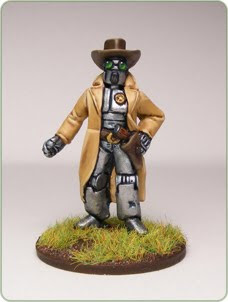 If that's not Happy Sharpnel then its his identical twin brother! [ok, so we may need to add some putty to make the robot beard!)

I lost the emails for the people I was discussing this with, so I'm putting it up here in case they missed it!

With the hands and head from this Alpha Forge Wardroid figure.

You'd have to model the lower jaw from scratch though i think.
By Brandlin