I made a few additions and changes to the Old Crow Models. In doing so I was heavily influenced by the inspirational work of Kevin Dallimore, and expecially his treatment of the same Old Crow vehicles in his 'Building and Painting Resin Vehicles' article. I have plundered ideas mercilessly throughout this project.

Using plasticard I added rear mudguards to the Gecko Scout and Pickup vehicles, and using plastic rod cut accurately at an angle I added rear lights and indicators to all the vehicles and headlights to the APC's and AFV. Some small decorative beads were added to the roofs of the vehicles to act as communications/radar domes.

I also added a number of accessories which i had also bought from Old Crom Models, these included the tow eyes, bumpers, exhaust pipes.

On the Scout vehicles I added spare wheels to the rear of the vehicles.

Now my attention turned to colour schemes. I want to stay away from the old green/brown or sand combinations so opted for what i hope is an urban grey type combination. I undercoated the vehices with Matt Black Plasticoat quick dry enamel spray - mostly because its widely available here in the UK, and i had some to hand.

This was the first time I've used my airbrush so a great deal of practice and trial and error went into the basic paint on the Gecko Scout and Pickup vehicles. Using Foundry Paints suitably watered down I opted for a first coat of Artic Grey 33B, with a Broad stripe of Storm Blue 39A, and a narrow intervening stripe of Slate Grey 32C. 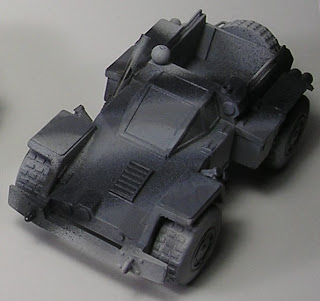 This combination captured the kind of cold grey urban feel i was after for the vehicles. The next step was to brush black over all the areas that needed to be detailed.
Details Blacked In: 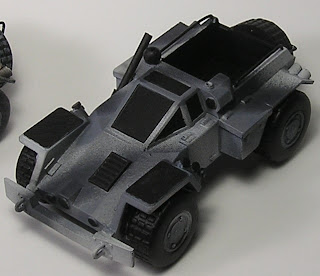 Then it was time to detail the vehicle. I wanted a used but not battered look to the vehicles so I simply washed them in a very dilute mix of brown and black Citadel ink with a little Klear added. I should do this more carefully in future as there are some areas where the wash pooled and dried.

Once the wash was dry i hit all the raised edges with a light brush of Boneyard 9C. this defines the edges and gave more of a shape to the vehicle.

The windows were next with a coat of Storm Blue 39C highlighted up to alternat corners with Storm Blue 39B and 39A, and then final highlights and 'glazing' streaks done in Canvas 8C. I was really proud of the effect, and will experiment with glossing the windows once i've sealed and matt varnished the vehicles.

Still a few details to do: 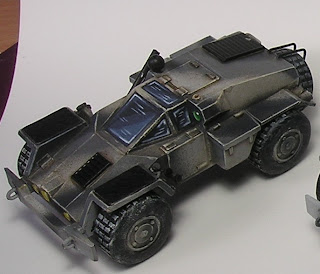