It's a good news day!

But before I don my happy face and force my bitter twisted paranoia into submission to tell you the good stuff lets welcome 2 new followers. Hi to ilyandath and TheMightyFlip, I hope you find something interesting here.

In response to some comments at Salute I have updated the geometry on the Pryn-Gul Tower to include shingles/slates of variable width rather than fixed width as before. This involved re-drawing all those shingles on the curved sections ...Aaaargh, but I thought it was worth doing.

Baby steps though,  I still have to sort out assembly instructions and pictures, packaging and ebay etc but we are getting there.

In even more good news, I completed the second sheet of the Stables building. OK, so it was a bit of cheat as this has common components with the Pryn-Gul Tower - the main conical roof is very similar, except the stables is marked out for the dormer window rather than the cut-out for the turret in the Pryn-Gul tower kit. The roofs and all other elements are interchangeable though so you can swap amongst these kits to your hearts content.

The roofing sheet for the Stables is smaller than A4 sized (about 2/3 of a sheet) so the kit will be a little cheaper than the main tower!
EDIT: for some reason the picture here is being shown narrower than the other sheets - thats just an effect of the blog honest!

Continuing today's theme of progress and good news, the stables geometry will go with the Pryn-Gul Tower geometry tomorrow to have prototypes cut! Then all I have to do is test assemble a couple, fix any geometry problems, paint a display version, take photographs, write assembly instructions,  and order multiple kits for sale... Simple!

Yet more positivity (is there no end?) the first sheets of shingles will also be going to the laser cutters! 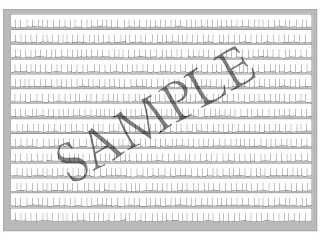 In other news Twilight now has its own forum, and those nice people there have given me my own little corner and made me a moderator [insert manical mad scientist world domination laugh here]. I've also added a link to the Forum from my blog... it's over there >>> somewhere. Pop along and say Hi.

I've included a little chart in a thread there which shows the ten stages I have for producing a laser cut kit, and as soon as I figure out how, I'll include it on this blog too. In the mean time here is a snap shot of the steps in making kits and where each one is now. 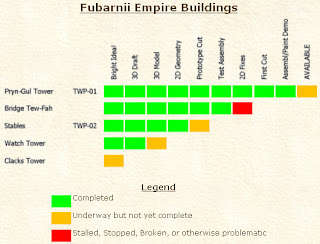 I might be slow in getting these things kits made but I don't think I can be accused of not communicating about them!

Feel free to make suggestions of building types here or on the Twilight Forum. If I like the idea I'll add it to the list. If I love the idea it wont go to the bottom of the pile either!

Finally I have been accused by a couple of people on line of neglecting my other projects particularly the ones about my Grymn. So next post - GRYMN FLIERS!