I've knocked together some basic structures in Sketch-Up to plan the various styles of modular trailer hulls I am going to build. The Chassis section is the Old Crow chassis and is a sandy colour in these images, the white/grey sections are the bits i need to scratch build.

The first is probably an ambulance / medical trailer (and is very similar to the hull I have already built). 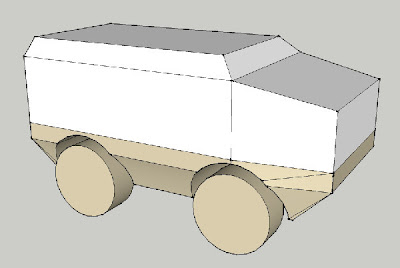 The second is more elaborate and is a mobile launch platform for helicopter and VTOL attack craft. The outer flaps hinge downwards to create an 80mm diameter launch platform. 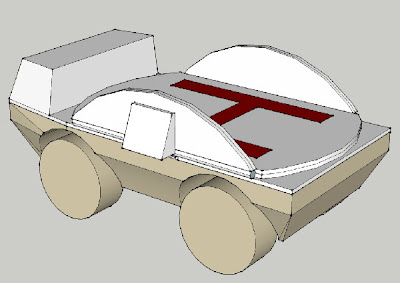 There are lots of details to add, such as the raised plate designs that epitomise the Old Crow vehicle style, and other markings, but hopefully you get the idea.

I'm finding it very therapeutic to play with the designs on the computer before making mistakes in plasticard.

EDIT(3/1/10) : Originally I was planning on having the Lander to service a small fleet of Antenociti workshop / Hasslefree Grymn Fliers like the one I used in my Diorama of Doom entry last year.

But they've been more than a year in the making and I quite like the vehicle that Fenris Games has recently previewed so may go with that...