Well, would you look at what the postman brought today! I won this from ebay just a few days after adding it to my wanted list.

I had thought about using this tank and the similar APC's to support a human sci-fi force either as allies or as enemies of my Grymn with their Old Crow vehicles. In fact, I was tempted to use the small but growing Sci-fi human range from Hasslefree Miniatures (there are some WIP pictures of new figures here and here too). Or maybe Pig Iron productions Kolony miniatures, which I had thought of using as Nort Troopers in my embryonic Rogue Trooper project.

Well for whatever reason - I wanted one. So after keeping half an eye on ebay for a few months was lucky enough to win this one (for 25% off the original GZG price too!)

The Ground Zero Games catalogue describes this as:

A gigantic kit of a tracked heavy tank with six independant tread units, hypervelocity main gun, co-axial autocannon, 2 turret-mounted 4-shot missile pods and an antipersonnel tribarrel on the command cupola! A truly awesome beast for your tabletop, consisting of 13 resin and 5 metal parts, measuring 220mm long (inc. gun - hull length 180mm) and 120mm wide and weighing in at not far short of 1 Kg of resin and metal!

Having unpacked the pieces and laid them out I agree that this is a 'beast' of a model. 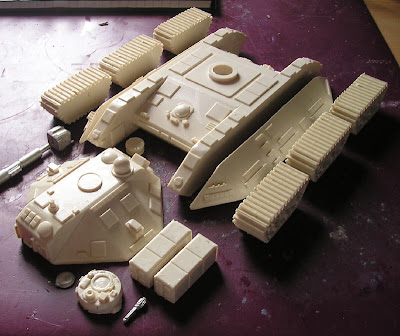 This hasn't been manufactured by GZG for at least a couple of years (I only became aware of the model in about 2006). Their website used to say that they no longer sold it because the molds were worn out*.

On closer inspection of the model I have, it's easy to see why; there are a large number of places where odd bubbles of resin are attached to the model. These are easiest to see on each and every one of the six track units. 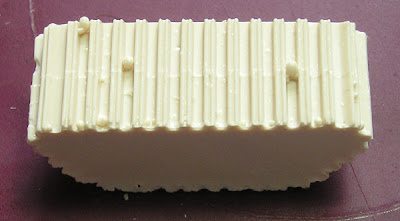 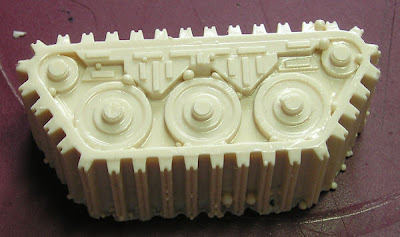 Also the overall surface finish of the model is quite poor; it's especially noticeable on the edges of the resin turret.

So, I was excited to see this on e-Bay, pleased when I won it, and looking forwards to the postman's delivery. But now I'm just disappointed and rather put off with the amount of work to complete it.

* - At the moment GZG is not producing ANY resin models in 25mm - something to do with having problems with the casting equipment.
By Brandlin

Email ThisBlogThis!Share to TwitterShare to FacebookShare to Pinterest
Labels: Sci-Fi