There, I admitted it.

But now I'm old enough to not worry what everyone else thinks! I'm a wargamer right? My standing in the eye of the public wont drop any lower because I admit to reading comics from 20 years ago!

I always thought that the Rogue Trooper storyline (at least the initial Nu Earth based stories) lent themselves well to miniature wargames play. So after thinking about it for some time i decided to take the plunge and began buying up Rogue Trooper miniatures. 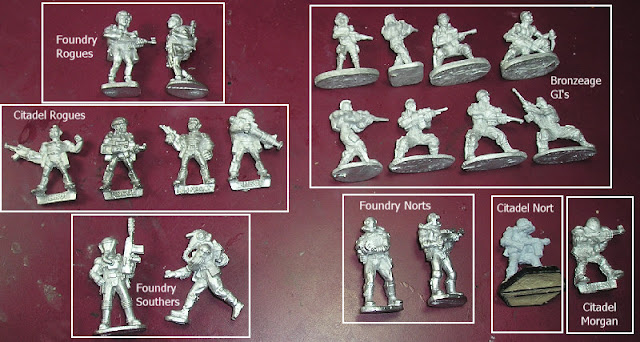 My idea is to build up some Nort and Souther forces and add to the Southers a small unit of Genetic Infantrymen (GI's).

So far I have a number of figures from the OOP Citadel line from ebay. Most of the range of Dark GI's (Blue Smurfs of Death) from Bronzeage Miniatures. Thanks to the recent price reductions I took the plunge on getting the Wargames Foundry figures too.

So I have 3, 5 man units of GI's, but need to expand quite some way on the number of Norts (currently I have 4) and Souther troops (currently 2). After some useful discussions on The Miniatures Page, I decided to go with Pig Iron Productions.

The Pig Iron Kolony troops have great head options which look very much like nort gas masks. Only down side is that all the Pig iron figures come with greatcoats on, but I shall overlook that.

The Pig Iron Infantry troops make ideal Southers, especially with the full face mask (leftmost of the alternative heads shown in the above picture), they're a little heavily armoured, but they look great.

Now all I have to do is buy them and start to paint some stuff. I dont seem to be very good at the "paint some stuff" bit at the moment...
By Brandlin