The dimensions of this dropship were set by the size of the original Listerine bottle used to form the prototype resin cast. I continued using those dimensions when I started to draw up this CAD version for laser cutting. Partly because I am teaching myself the CAD system.

In the meantime I have changed my mind regarding the likely payload for the dropship and want to be able to include almost all my Old Crow 25mm vehicles.

So you see that somewhat large block of 'pine' in the following picture? Well, that's a block with the maximum dimensions of the vehicles I now want to be able to transport. Its the Payload Block. 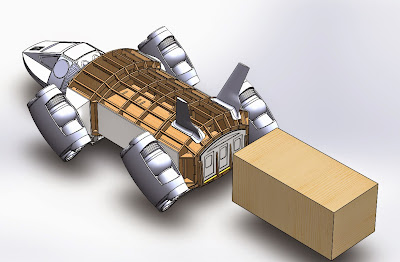 It's a little on the large side when you slide the block into the payload location... 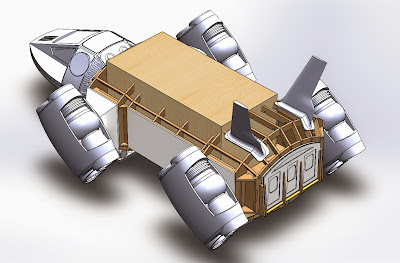 Compare the maximum dimensions to the relatively small rear door... 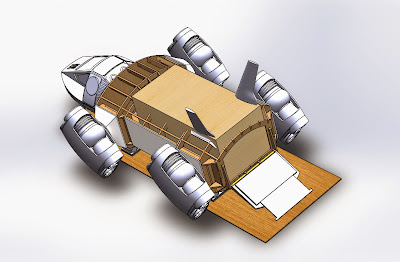 So I have some work to do.

Bear in mind I still need to be able to get a full length ramp in under the existing floor, which in itself will mean that I have a few mm less headroom than shown here.

I sketched up a simple block shape to stretch the hull around the Payload Block and I dislike it. It makes the whole ship look far to 'dumpy', the main hull becomes almost cylindrical.

So, I am doing to play around with a few options.

I MAY press ahead with this current version and get it made, as this could handle some of the vehicles such as the Goanna and Gecko scout cars and trucks (unlaiden). This could be a command/light version of the drop ship. A further 'Heavy' variant  could then have an enlarged hull with the same cockpit, landing gear, engines and tailfins making the whole thing modular.