Do you think he'll notice? - III

It's been a couple of weeks since I posted progress on my Diorama of Doom entry. You might think looking at these pictures that very little has changed, but dont be fooled, an awful lot of planning and intellectual consideration has gone into this stage (or in the words of my wife "are you giving that another coat of looking at?"). 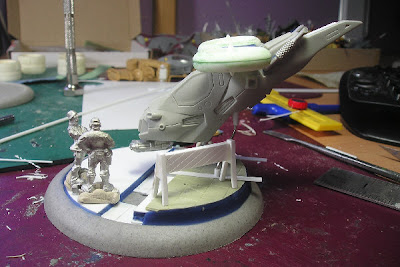 I've had to put it on a slightly larger base (100mm rather than the 80mm initially planned). I was reluctant to do this as I wanted a very tight composition but I simply can't fit everything onto the smaller size.

I've built a slightly raised raised area on which the copter sits, and this will finally represent a road edge complete with kerb drain and slight road camber. 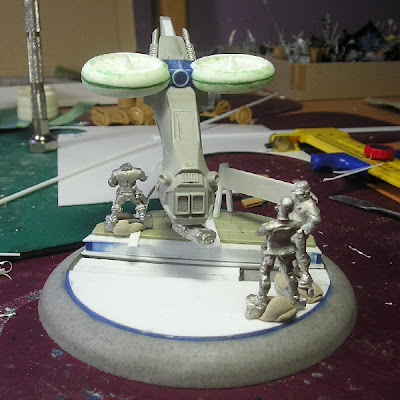 As before the headless Grymn figure behind the 'copter is a proxy for a Hasslefree Grymn Pilot which I am waiting (almost patiently) for them to release. There is also some space at the front of the diorama for a mystery item which I wont reveal until the final competition pictures are released. 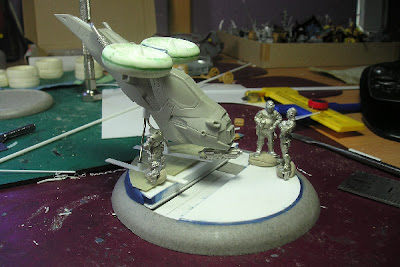 I have begun the process of sculpting the undercarriage and skids - neither of which are glued in place yet. I have also slung a weapon under the nose of the copter. I was going to add some small stub wings to the nose of the machine, but they will interfere with something I have planned for the painting so reluctantly I have discarded the idea. 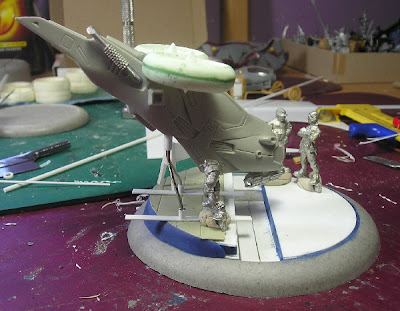 Cover the base in putty and sculpt the kerb edge, drain and road surface.
Fiddle about with the position of the copter skids.
Complete the sculpting of the undercarriage
By Brandlin