The Yellow Horde I

Well, I managed to do precisely zero painting last week, so I thought I'd share some of the figures in an older (but still unfinished) project of mine.

This is a Growler Chieftain from the old VASA miniatures game VOR. It's been painted as a yellow mushroom monster which was the alter ego of a friends role playing character. Spawn (as its called) was once responsible for sinking a ship called the Lucky Drake, and he is depicted here amongst the wreckage. 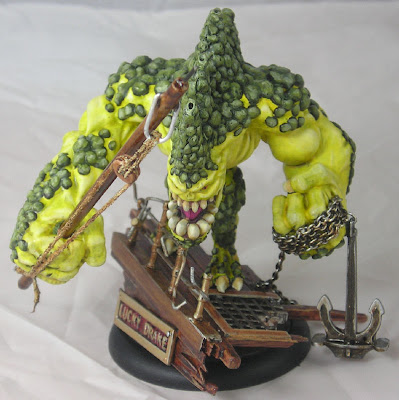 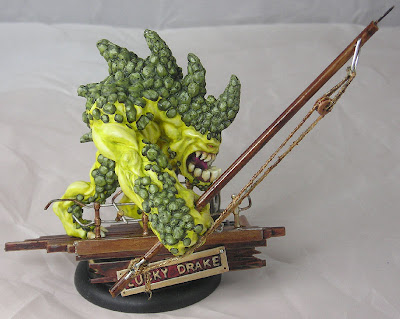 As with my other painting this figure was done using Foundry yellow paints. Even though the figure is around 10cm (4") high this was all done with a brush before I had an airbrush. Nowadays I think I'd certainly have done the base coats by airbrush and possibly even the first highlight coat.

The base is scratch built from matchsticks and some plasti-card. The railings are made from stanchions from a model boat company with paperclips bent for the railings. Block and tackle and the name plate are also from the model boat company - I find they are a great source for unusual items.
By Brandlin